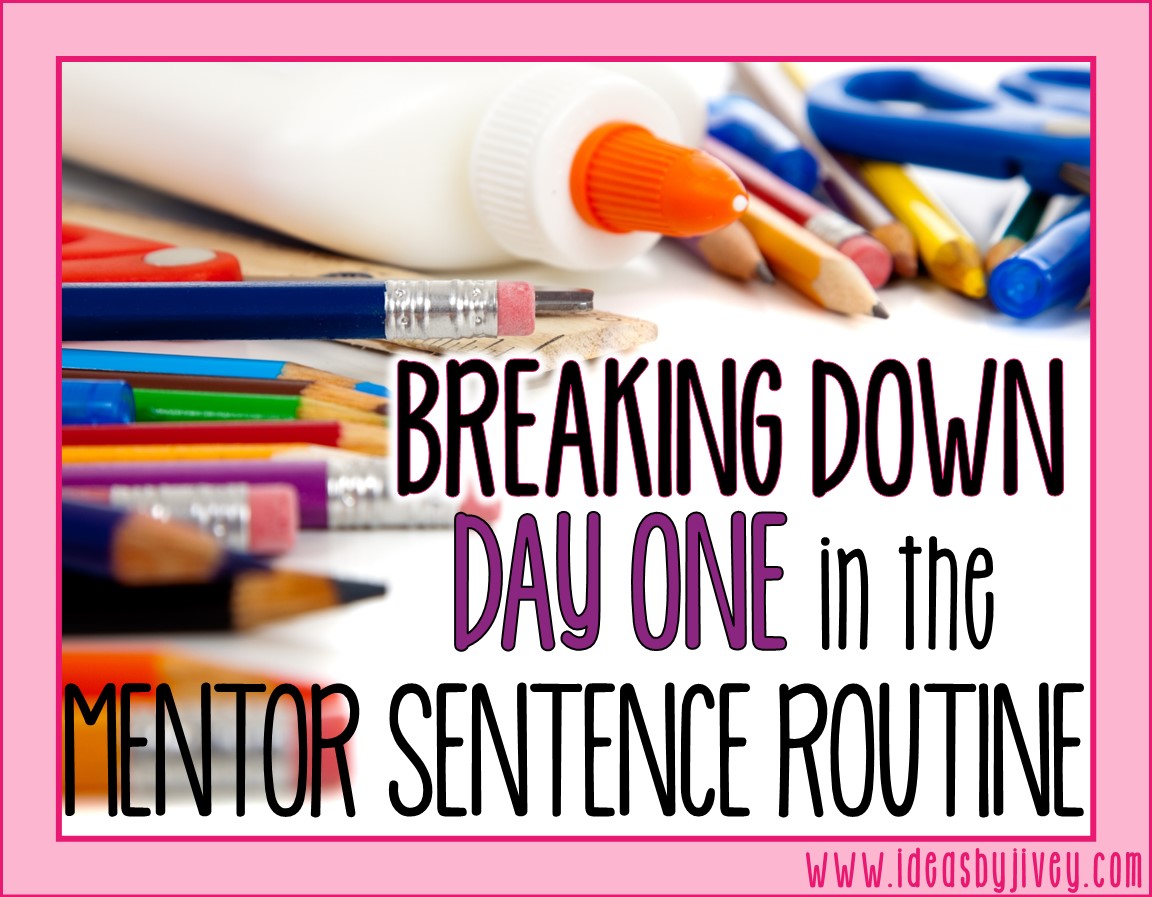 Mentor sentences help students learn the RIGHT way to write, rather than the WRONG. It’s a total gamechanger in the classroom and a proven best practice that will transform your teaching. The purpose of Day One is to help students recognize (or NOTICE) all of the good things about the mentor sentence. This has been proven to help students write more effectively, as they soak in the examples we show them… imagine all of the TERRIBLE examples they’ve soaked in when presented with “fix-it” sentences. YIKES! 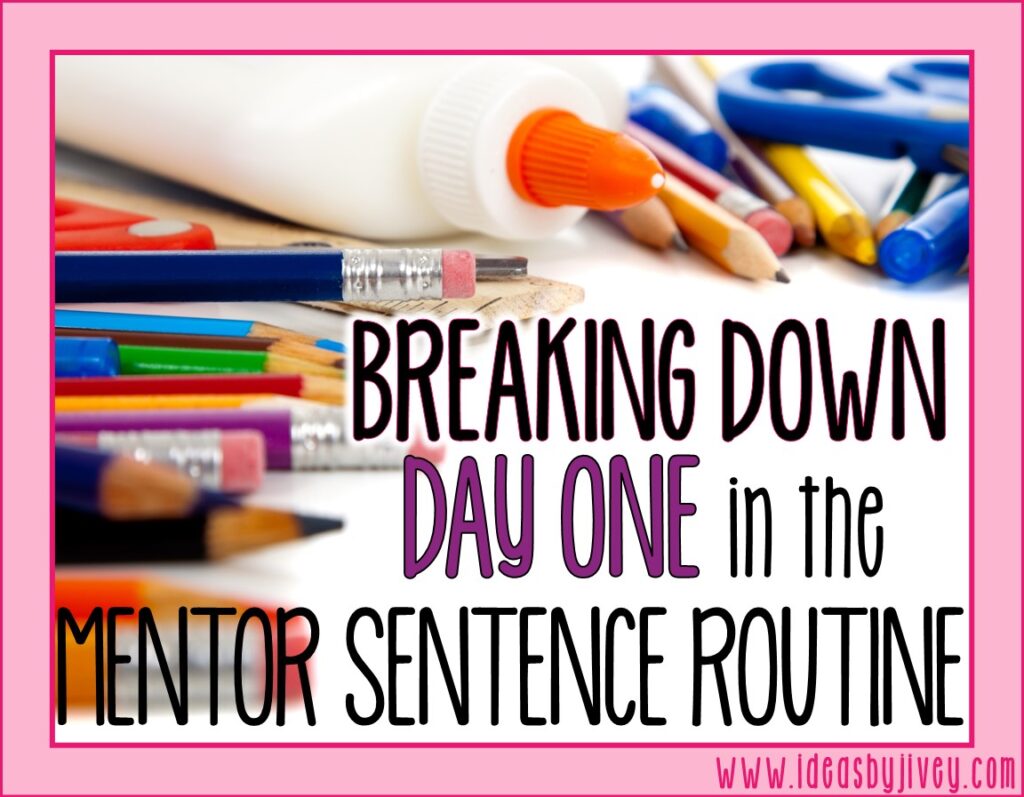 Let’s get started with how to implement the mentor sentence routine in 2nd-5th grade – day one, time to notice!

You can get the lesson I’m using as an example in this series delivered right to your inbox! 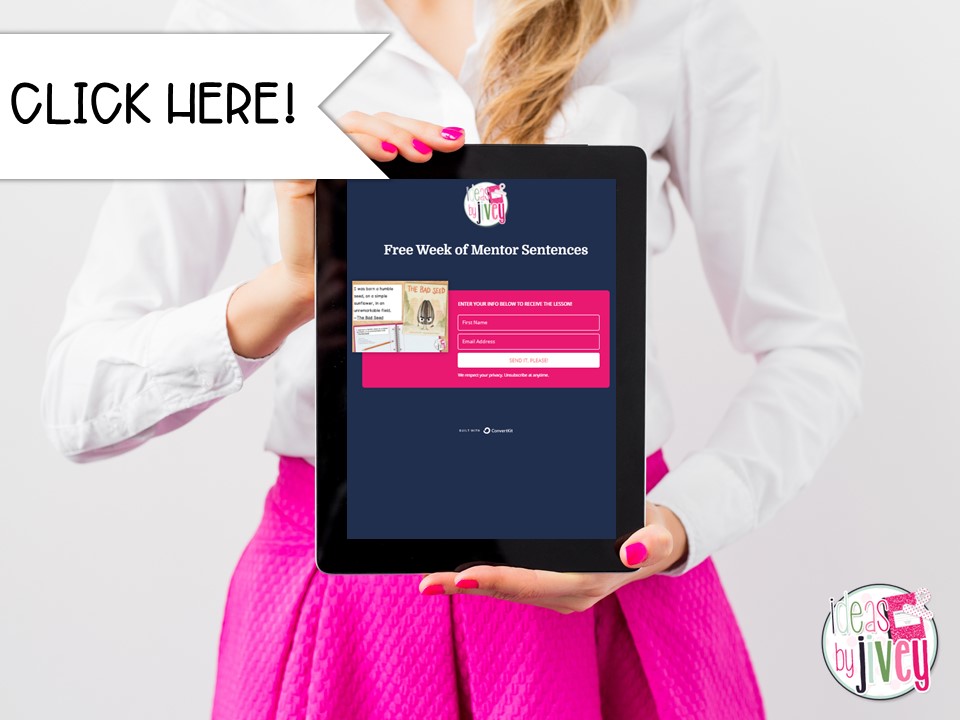 DIRECTIVE: Students will glue the mentor sentence into their notebook, and then make a list of all the things they notice about this sentence that makes it a super sentence. The class will participate in a discussion around what they noticed, creating a larger list compiled from everything students share. 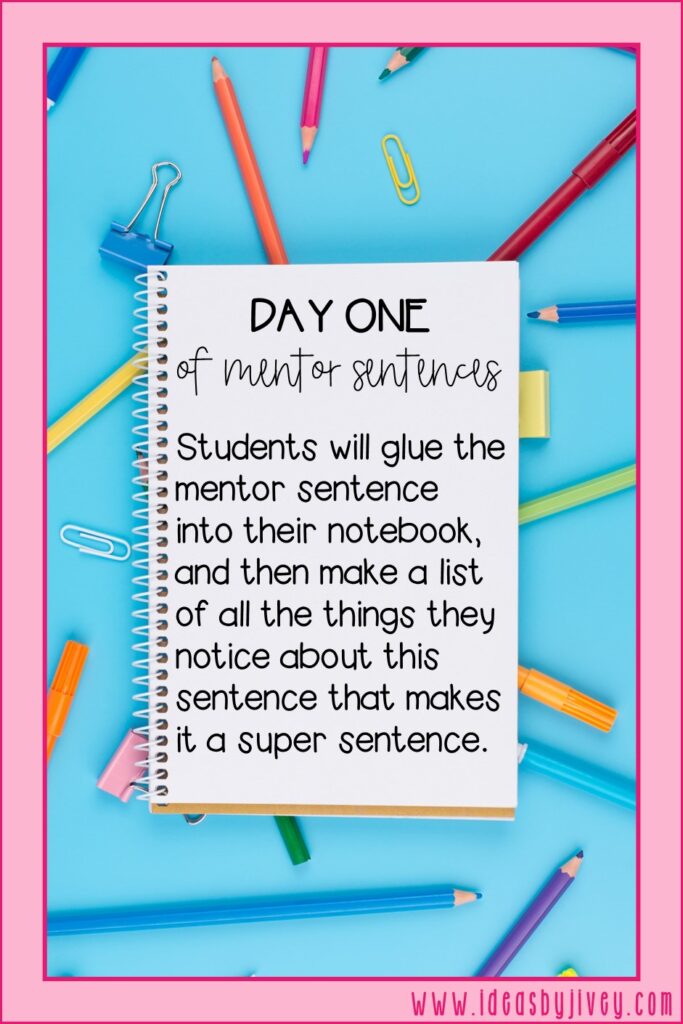 Let’s break it down! What do you notice?

First, have the students read the mentor sentence with you. They can either read straight from the sentence strip you gave them that’s glued down in their notebook, or they can follow along with your display. This helps you get in some fluency practice. In fact, you’ll want to read the sentence together every single day of the entire week to practice that fluent reading.

**If this is the very first time that you’re ever doing mentor sentences as a class, you may even want to completely skip the notebook for this week. Working together as a class, and modeling your thinking, will be an important step in establishing expectations. Also, keep in mind, mentor sentences should only take 10 to 15 minutes each day, but at first, it’s going to take a little longer because they’re not familiar with the routine. But once you get the routine going, they’re going to know exactly what to do every single day. You won’t have to repeat directions, you won’t even have to do a lot of prompting after a few weeks.**

At first, this might be a bit difficult for your students. If they’ve never been exposed to the mentor sentences routine, they probably aren’t sure why you’re asking them to talk about all the good things. If they’ve only ever looked for bad things, they may not be aware of how to notice the good things in a sentence, or even what makes a good sentence.

They might only notice some very simple things at first like, it starts with a capital letter. This is when you may need to model some thinking so they can get their brain on the right track… but don’t rush to it right away! Give them a little time to really look at the mentor sentence; they just might surprise you! Sometimes it takes just one student offering something about the sentence to get others thinking. 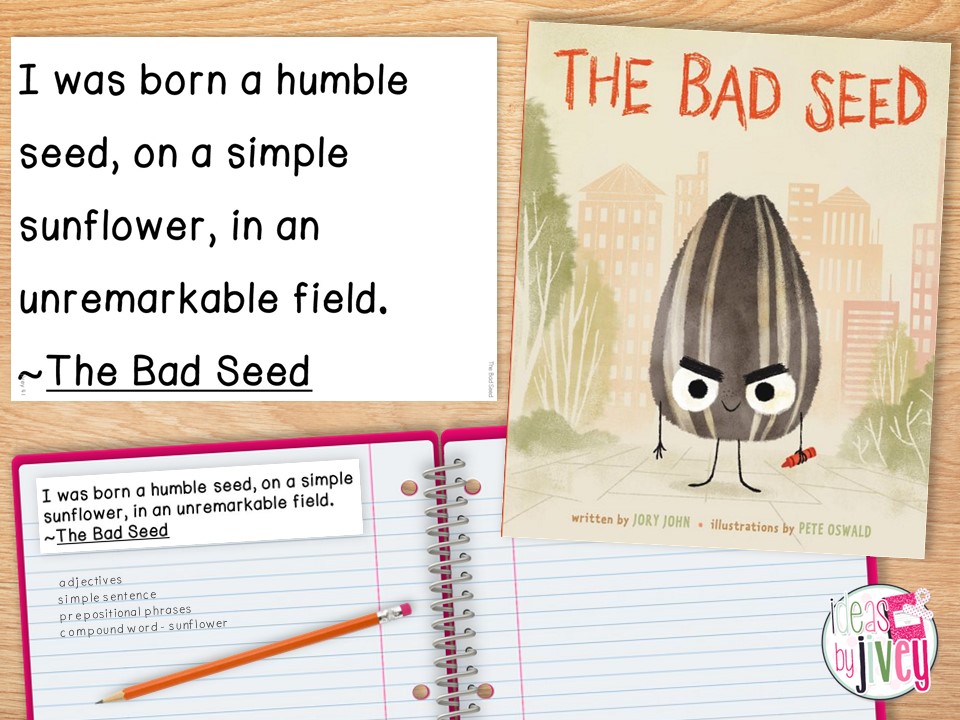 Discussion, not a lecture! 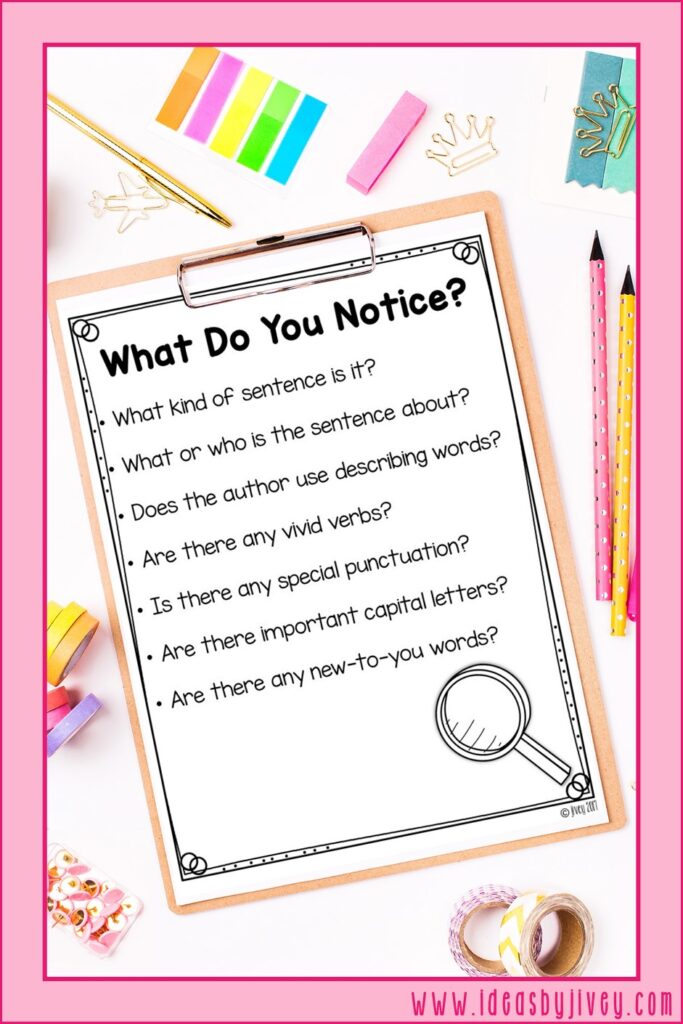 This poster is included in your free lesson download for The Bad Seed.

Remember, all of the learning is going to be happening through discussion. It’s important to pose questions to help lead these discussions. So even for something as simple as the capital letter, ask, “Why is it capitalized?” If they notice the mentor sentence has a period at the end, lead them into a discussion about sentence types. If they don’t know the types of sentences yet at this point in the year, depending on where you are in your skills, then introduce it. “There is a period at the end, which means this is a sentence that tells us something. This is a statement, or a declarative sentence.”

You might present to them as a think-aloud how you notice the commas to help them understand what they should be doing on this day. “The commas in this sentence are creating pauses.” So read again to show how they create pauses: “I was born a humble seed (pause), on a simple sunflower (pause), in an unremarkable field.”

Maybe they will even notice there are different types of articles being used in the mentor sentence, because “an” comes before that vowel sound and “a” before the consonant sound. Another great discussion starter: ask, “Could we say ‘an simple sunflower’ or ‘a unremarkable field?’ Why not?”

Of course, in this step of the mentor sentence routine, the most important part of the discussion is going to be about that focus skill, the amazing adjectives. You definitely want to make sure the students are aware that this is a descriptive sentence that is using adjectives to help describe the seed, the sunflower, and the field. 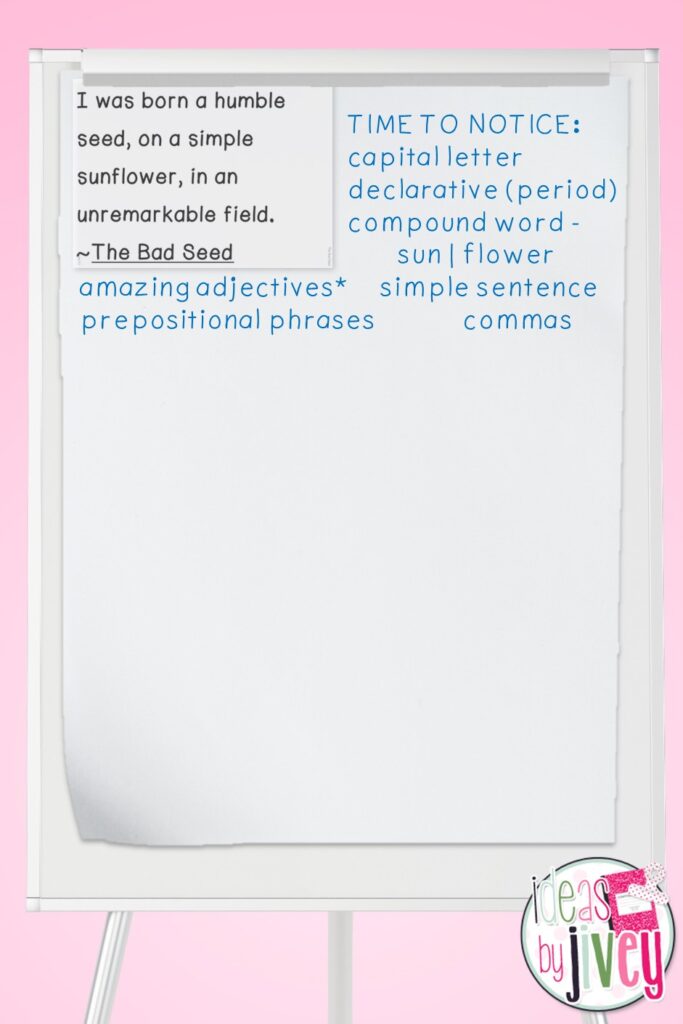 If they do not bring up adjectives (or “describing words”) during this time to notice, then you definitely want to guide them to see that. Give them hints that the sentence has describing words by asking, “What kind of seed?” or “How did the author describe the seed?” for example. Discuss how the author told us more information and more detail about what kind of seed he was, and the kind of sunflower that he was born on, and the kind of field that he was born in.

Remember, all of the lessons in the mentor sentences routine should only be 10-15 minutes each day, so you won’t launch into a whole elaborate lesson on adjectives, even if they don’t know about them. You just want to remind them that these are describing words; they give more detail, telling us more information about those nouns.

If they don’t notice it on their own, you’ll also want to point out that they’re amazing adjectives. They aren’t plain, boring adjectives like “bad” and in fact, they are all actually synonyms of each other. They’re better ways of saying the same word. Humble, simple and unremarkable all mean the same thing. The author didn’t say, “I was born a plain seed, on a plain sunflower, in a plain field,” because that would be boring. Instead, the author used these amazing adjectives to describe those nouns and really spice up the sentence.

You’re going to continue touching on the skill over the course of the week… I know this is a paradigm shift for you as a teacher, too right?! You’re probably used to spending a lot of time explaining a skill, then maybe doing a worksheet or two… but not with the mentor sentences routine! Studies have proven that presenting information in short spurts SEVERAL times is much more effective, so that’s what you’ll be doing all week long.

Keep an eye out for the focus skill of the week throughout the day in other subjects. These are great little teachable moments, and it helps students learn to become more observant, too. It also provides more “short spurts” to get in that frequent reminder of the skill without droning on and on in a lecture or just regurgitating information on a worksheet. So for this lesson, tell students to be on the lookout for other adjectives and celebrate those moments. “Oh, you’re right. That is an adjective. Good for you. And what’s it describing? What do you see that it’s describing?” 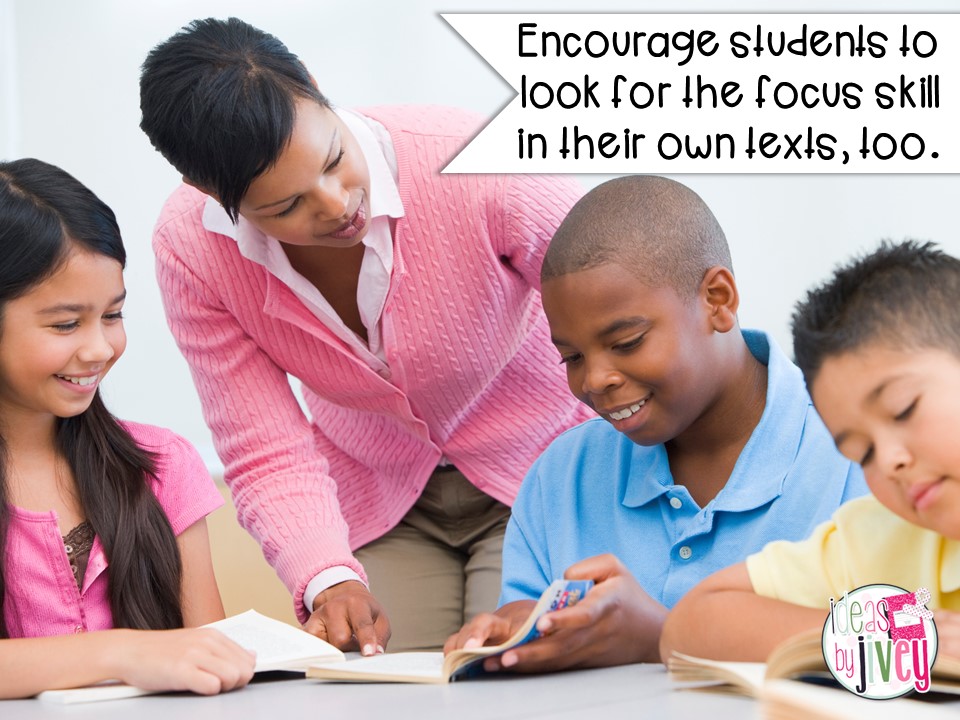 When students begin to work in their notebook with you after a week or two of modeling, I do suggest having them write down anything in their notebook that they are missing from the class chart you make. This way, as you progress through the year, they will have the complete lesson to refer to when analyzing future mentor sentences. (Comparing past mentor sentences to a current one is a great way to get some higher-order thinking in as well as help students truly understand skills that continue to spiral through the year!) 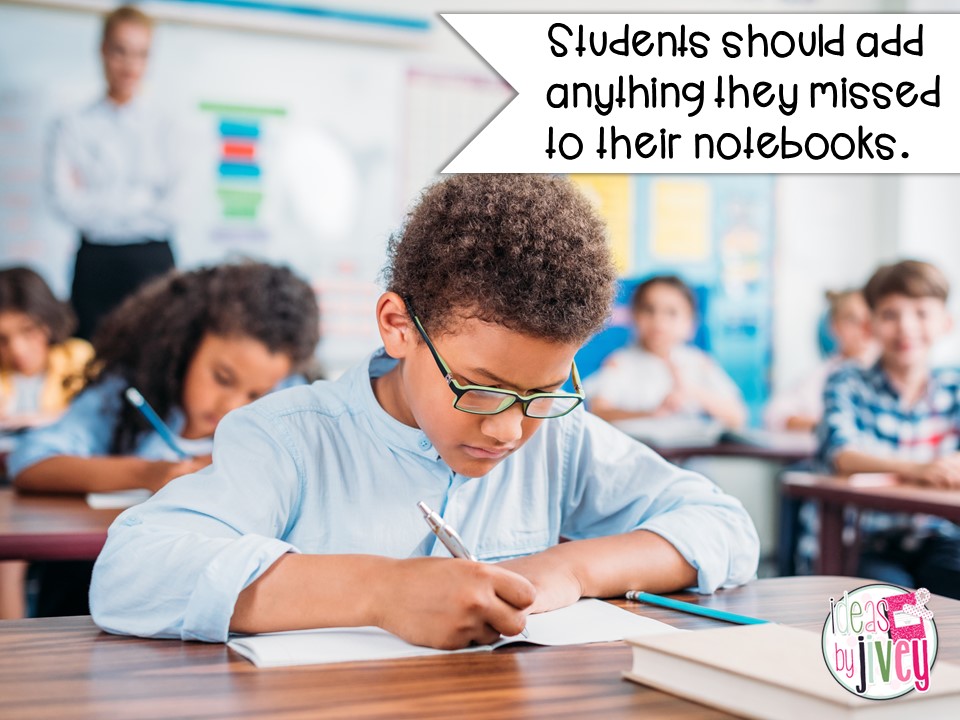 Ready to move on in the routine? Head to the next post!