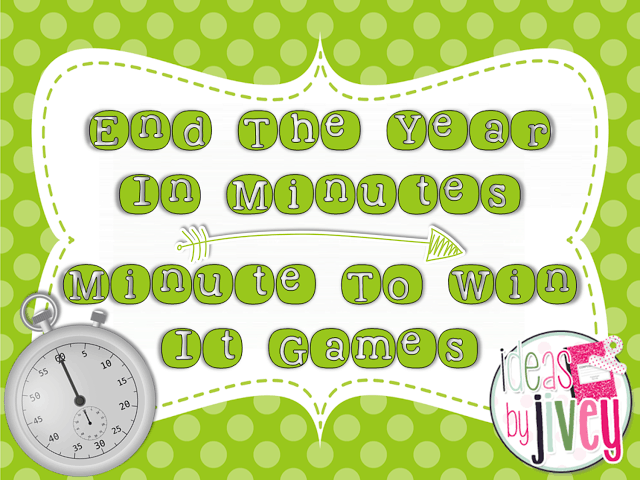 If you have never played Minute To Win It in the classroom, you have been missing out!! We played these games almost the entire last day of school! It’s a super cheap and fun way to “play” with your kids. *I did NOT create any of these games- these are games that you can easily find by doing a search on the internet!* 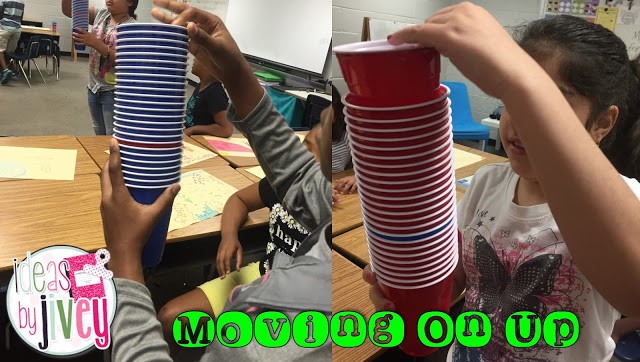 Moving On Up is a good starter game- most of mine could complete it! You will need two colors of solo cups. I got mine on sale at Kroger! They come in bags of 50, so with this game, you can have multiple players competing at once. Change out one cup in each stack for the opposite color. In one minute, students should try to move the bottom (different colored cup) to the top by taking the top cup of the stack and moving it to the bottom. They can only use their hands (no leaning the cups against their body). 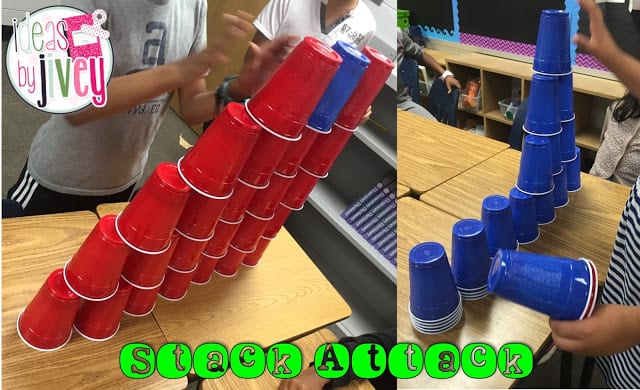 Stack Attack is a bit trickier! Students not only have to build a tower with the cups, but then unstack them and put them back into one stack! Almost all of them got their stack built in one minute, but only a couple could unstack them without them falling all over the place! They still loved this one though! 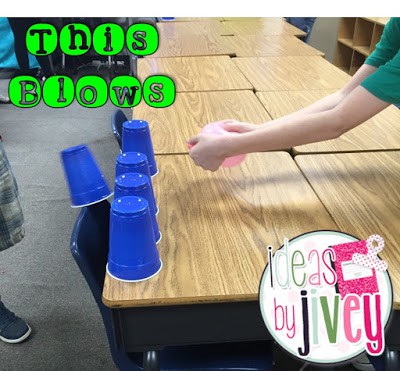 Finally, students had to knock cups off of their desk using only the air they blew into a balloon in the game, This Blows. Most could do this with no problem! They love the noises it makes too, of course. ;o) Once they finished this game, I had them blow up the balloon and we used them for a couple of other games… 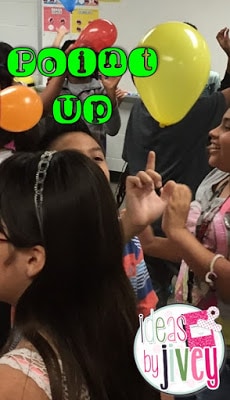 In Point Up, they all had to keep their balloon in the air for one minute only using one pointer finger. After this game, we split into two teams and had a “relay race” to pop all of our balloons (one at a time) in one minute. The balloons were on one side of the room and the chair they popped the balloon in was on the other side of the room. I was worried some wouldn’t want to pop it, but they all loved it!

They will be hungry after all that, right? Give them a little snack! 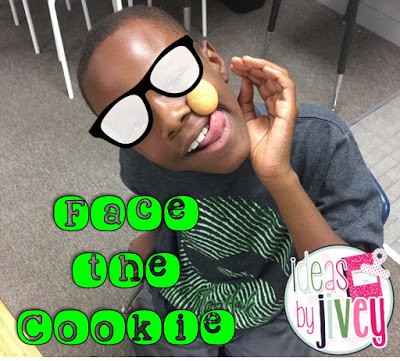 Face the Cookie is as fun to watch as it is to play! Students put a cookie on their eye (close it!) then wiggle their face muscles to bring it down to their mouth. It’s so funny! They aren’t supposed to use their hands, but I let them hold their hand on their face in case it fell so they could start over. (They just weren’t allowed to touch the cookie!) 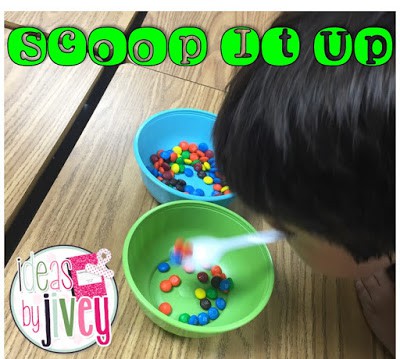 Students use a spoon in their mouth to scoop M&Ms from one bowl to the next. They were all able to complete this in one minute! If students don’t touch the candy, you can reuse it for the next game! 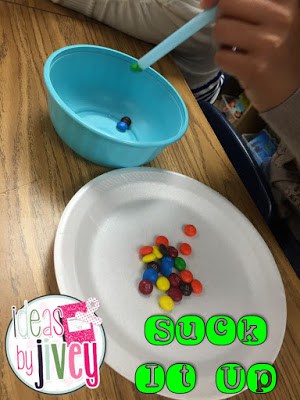 Suck It Up uses M&Ms, but most don’t want to eat them when they are done because they tended to drool down the straw. Ha!! Students sucked through the straw to “grab” an M&M, then carried it to the bowl. I gave them 25, and almost all of them were able to finish in one minute! I gave them milkshake straws because they have a bigger hole, but the game works with regular straws, too. 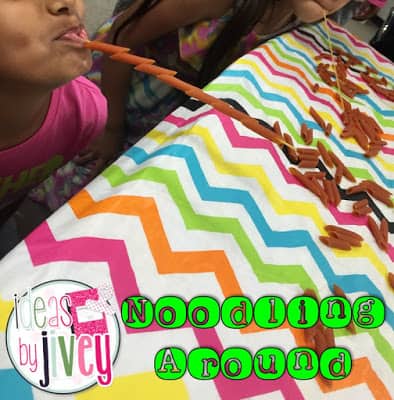 Noodling Around was hysterical! Using only a spaghetti noodle between their lips, students had to get as many penne pastas on their noodle as they could in one minute. Some were GREAT at it, and ran out of room on their noodle before time was up! Some dropped the penne pasta they had loaded on their spaghetti as they tried to get another. This one is easy to have multiple competing at once!

The last game we played was super easy and just for fun. 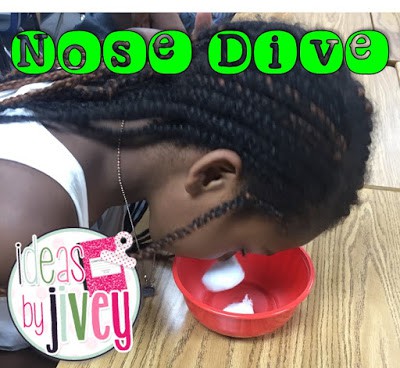 I put a dab of Vaseline on the end of each kid’s nose, then they took a “Nose Dive” and got the cotton balls from their bowl! It was a fun way to end the games because they were all successful (and laughed the whole time)!

To play all of the games we played, you need: 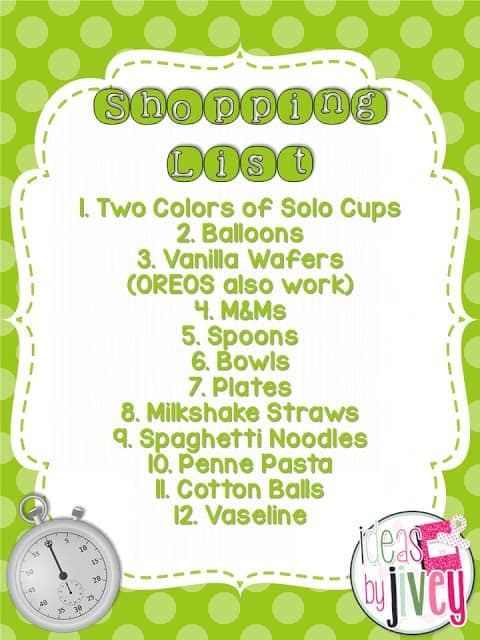 If you are like me, you have many of these items lying around your classroom or house already! Enjoy these fun games this year, or in years to come!

And P.S.- there are SOOO many more games out there- check out some more!

Wondering how to make your ELA block come together? Check out this post where I lay out some suggestions of ways to plan your schedule! ... See MoreSee Less

Planning a Language Arts Schedule (How To Fit It All In!)

🌞 Groundhog Gets A Say is a fun book for kids of any age, but I especially liked to use this mentor text to tie in some research skills and opinion writing!The book is written as a narrative, but is filled with facts about groundhogs as the main character tries to convince everyone that he deserves more than just ONE day of recognition.The unit I made for this book includes printables for text features, note-taking from text, fact and opinion, main idea and details, context clues, a writing brainstorm organizer, plus a mentor sentence lesson for relative pronouns and contextual vocabulary activities! I'd love you to check it out on my website: www.ideasbyjivey.com/product/groundhog-gets-a-say-unit/Or if you prefer, you can get it here on TPT: www.teacherspayteachers.com/Product/Groundhog-Gets-A-Say-Mentor-Text-Digital-Print-Unit-520756 ... See MoreSee Less

😍 The latest seasonal club unit for upper grades is completed, and you'll definitely want to grab it before next week! Groundhog Weather School by Joan Holub is an informative mentor text about groundhogs, Groundhog Day, and weather, but it's presented in an entertaining way that will keep your students laughing while they learn. 😂✅ With this unit I created, you'll receive a week of explicit lesson plans to go along with the book. 🤓 You'll get everything you need to teach about organized notetaking, tier 3 vocabulary, word parts, and types of sentences, plus you'll be able integrate it all with science: weather, seasons, and groundhogs! Grab it at this link: www.teacherspayteachers.com/Product/Groundhog-Weather-School-Mentor-Text-Unit-Grades-3-5-Groundho... ... See MoreSee Less

Are you reading a fun book for Groundhog Day? 🌞

🌞 Groundhog Gets A Say is a fun book for kids o

❄️ There are so many fantastic #picturebooks t

😍 A NEW FAVORITE! 🩰 Have you gotten your ha

I didn’t always use mentor sentences in my class

🐘 Strictly No Elephants by Lisa Mantchev is a p

🍯 Did you know January 18 is Winnie The Pooh Da