If you’ve missed any of the previous posts about mentor sentences from either me or Collaboration Cuties, check them out by clicking on the tab at the top- under my header- called Mastering Mentor Sentences (after you read this post, of course!). Technically though, this is my first post in the series that we are doing together!

We first heard the idea from Jeff Anderson in his awesome professional books. We took his ideas and adapted them to make a routine that worked for elementary school. Here is what we do!

In today’s post, I am going to focus on Day 1 and Day 2 -in a normal week, those days would be Monday and Tuesday. If it’s a short week, we do both of these parts in one day.

I give the students their sentence for the week to glue down into their journals. This sentence comes from a book we read the week before, or we are going to read that week. Usually, I have not read the book when I give them the sentence, so when I do read the book, they are hanging on every word, waiting to hear the sentence. I have trained mine to snap when they hear me read the sentence (instead of shouting out). Last week, we used a sentence from one of my favorite books, Step-Stomp Stride by Andrea Davis Pinkney which I had already read to them the week before as part of our biographies unit.

Sojourner put one big-black-beautiful foot in front of the other and she STOMPED on the floorboards of ignorance that were underneath.

Once they have their sentence glued down, we practice reading the sentence together fluently. I’ll call on some volunteer students to read it by themselves to show off, but we read it a few times chorally as well. Then, they “notice” what is so awesome about this sentence. Some things I ask to prompt them and get them going are:
How is this sentence different from others you’ve seen? How is it the same? What makes it so awesome? Why do you think I chose THIS sentence out of ALL the sentences in the book? What about the way this sentence is written stands out to you?
I expect them to write at least three things down on their own, but usually they write more. I give them just a few minutes, and then we come to the floor and they share what they saw. I add their “notices” to the chart. I always have something in mind that made the sentence stand out to me, and the students know they are trying to “guess” what it was that made me pick it. This helps with their list of “notices” too because they know it’s usually not something small and simple (although, sometimes it is!). Here is our list from last week’s sentence: 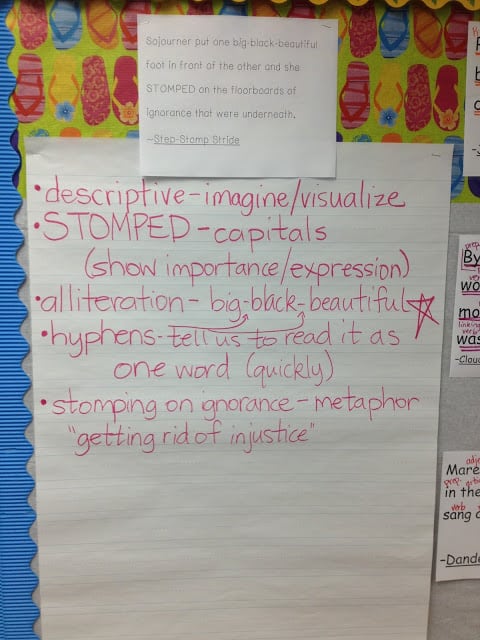 I have my students tell me why for everything. They can’t just say the sentence is descriptive. They had to tell me they could imagine the scene in their head like a movie. They couldn’t just tell me STOMPED was in all capitals- they had to tell me why they thought the author put that word in all capital letters. You’ll notice the star next to “big-black-beautiful”- there were two things about that, and they got them both!! Alliteration, and the hyphens! We also talked about this being a compound sentence, but I just realized it didn’t make it on the list. I don’t know how that happened! Whoops! I am usually really good about making sure everything that they say is there! My apologies!

The students re-write the sentence in their notebook, skipping lines in between, and label all the parts of speech that they know (first, independently). Then we come to the floor again, and they tell me what parts of speech they know, but again, they have to talk about WHY. Here is the completed sentence, but check below it for examples of the dialogue we had as we labeled: 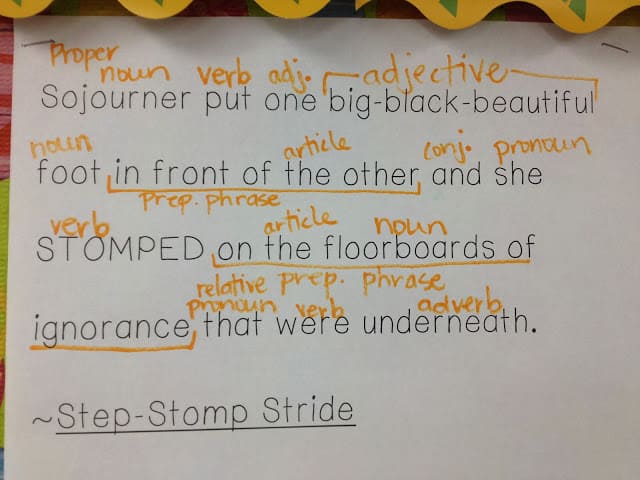 Student 1: Sojourner is a proper noun.
Ms. Ivey: How do you know that?
Student 1: Because it’s her name, and she is a person.
Ms. Ivey: Good! What else?
Student 2: Underneath is an adverb.
Ms. Ivey: Really? But it tells position. Why isn’t it a preposition? (yup, I’m mean. Trying to trick them!!)
Student 2: (thinks for a minute) Because it tells where they were, but it doesn’t connect it to a noun…? (She was not totally sure, but she was right! I was so proud!)
Ms. Ivey: Very good!!! No fooling you!! What else do you notice?
Student 3: Oh! “On the floorboards” is a prepositional phrase, because like <student 2> just said, it DOES connect to a noun. On connects to the floorboards, and it tells where!
Ms. Ivey: Very good!! You are right, and actually, our whole prepositional phrase is “on the floorboards of ignorance”- of is ANOTHER preposition! (It’s okay to tell them some things, like this, because you don’t want them to be confused…)
Student 3: So “in front of the other” is a prepositional phrase too, right?
Ms. Ivey: Yup!
You can see that, by this point, I am not having to really lead them too much. They do most of it on their own. This is a different story at the beginning of the year. Please do not believe that the conversation you just read above happens right away. They begin to understand the “language” and know how to tell me the answer as we get more comfortable with the process. Of course, I would not give them a sentence like this in the beginning of the year either- I want them to feel successful, which they can do on simpler sentences at first. Something you might hear from them early on is, “big is an adjective.” Instead of just labeling it, make sure to ask, “how do you know?” If they give you a blank stare, or just tell you it’s a describing word, make them tell you what word it’s describing!  Same with nouns. Yes, at this point they had BETTER know what a noun is, but make them tell you what MAKES it a noun! (For example, it’s a person.) This is what leads to them being able to tell you why something is a preposition, for example. It also is great when you get into those adjectives that are also nouns, like “kitchen table.” They want to tell you kitchen is a noun. Well it is, by itself. But it’s describing what kind of table!
Mentor sentences give you the chance to hit several aspects of grammar repeatedly each week. I rarely teach grammar in isolation anymore because I can do it through mentor sentences! I know this was quite a long-winded post, but I’m trying to be detailed in hopes you will see the benefits of mentor sentences and want to use them yourself! I have seen my students’ understanding of grammar improve, and wait until you see how it improves their writing in Thursday’s post! 🙂
Now click here to head over to Collaboration Cuties to read how they use mentor sentences with their class! They are sharing about a sentence from one of my favorite books to read with my fourth graders: George Washington’s Socks!
CLICK HERE to read part two of this series!

If you want even more IN-DEPTH step-by-step help with implementing mentor sentences, check out my courses! 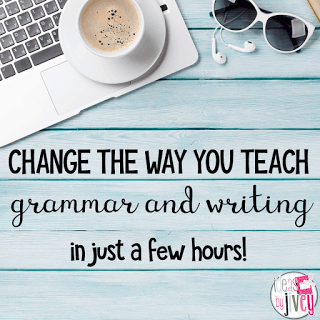