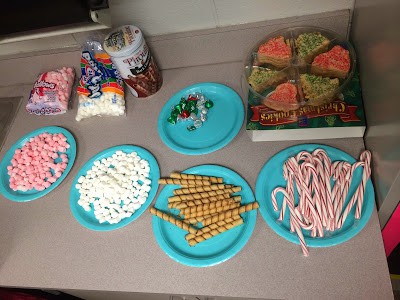 Let’s get real. It is really hard not having a room-mom. I hope you are lucky enough to have one, because lemme tell ya, I was spoiled at my old school with great room-moms every year. But I had to do the holiday party on my own this year. I tried to make it pretty simple- a Polar Express Party, but it still turned out kinda complicated. 😛 I guess that’s just me!! LOL 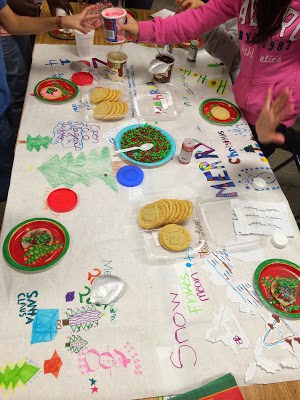 They also decorated sugar cookies- that’s ALWAYS a hit. They think it’s so much fun. The “tablecloth” was butcher paper I pulled this morning and let them decorate it. They had a blast doing it, and it saved me a little money! 🙂

While they drank their hot cocoa and ate their cookies, they watched the Polar Express movie, and I pulled them to my table to make an ornament! And decided it was way too cute not to do! I hunted down clear glass ornaments (yes, hunted down. Three stores were sold out. I totally blame Pinterest for this!!!!!) and got all the materials: fake snow, pom poms, and pipe cleaners. 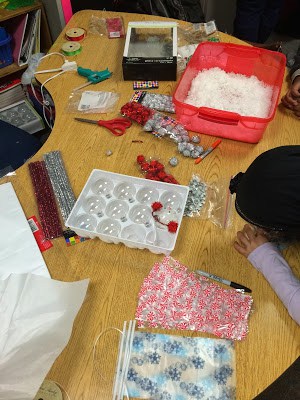 I was in charge of the gluing, of course, but they stuffed the ornament with snow and drew on the face- except for the eyes… we used googly eyes! They were TOO CUTE!!!!! 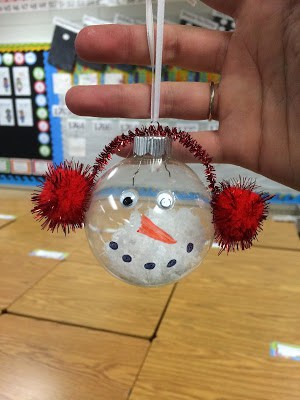 All of my kiddos were excited to take it home and put it on their tree! 🙂

Last, but not least, I got my kiddos a Christmas present… I always do the same thing: a $1 book from Scholastic and crayons. I get the crayons in August when they are on sale for a quarter (gotta plan ahead)! They always need crayons about this time of year because theirs are worn and lost. 🙂 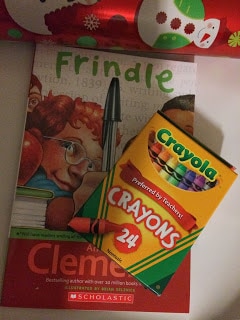 I wrap them all so they have something to open (because, let’s face it, we all love opening presents, don’t we?!) which is a lot of work, but worth it because they love it!

I also gave them a Polar Express bell: 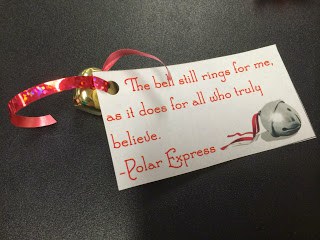 And yes, I was ACTUALLY scraping these kids off the ceiling this afternoon to get them home. ACK! But now…………. I’m officially on break!! 🙂 🙂