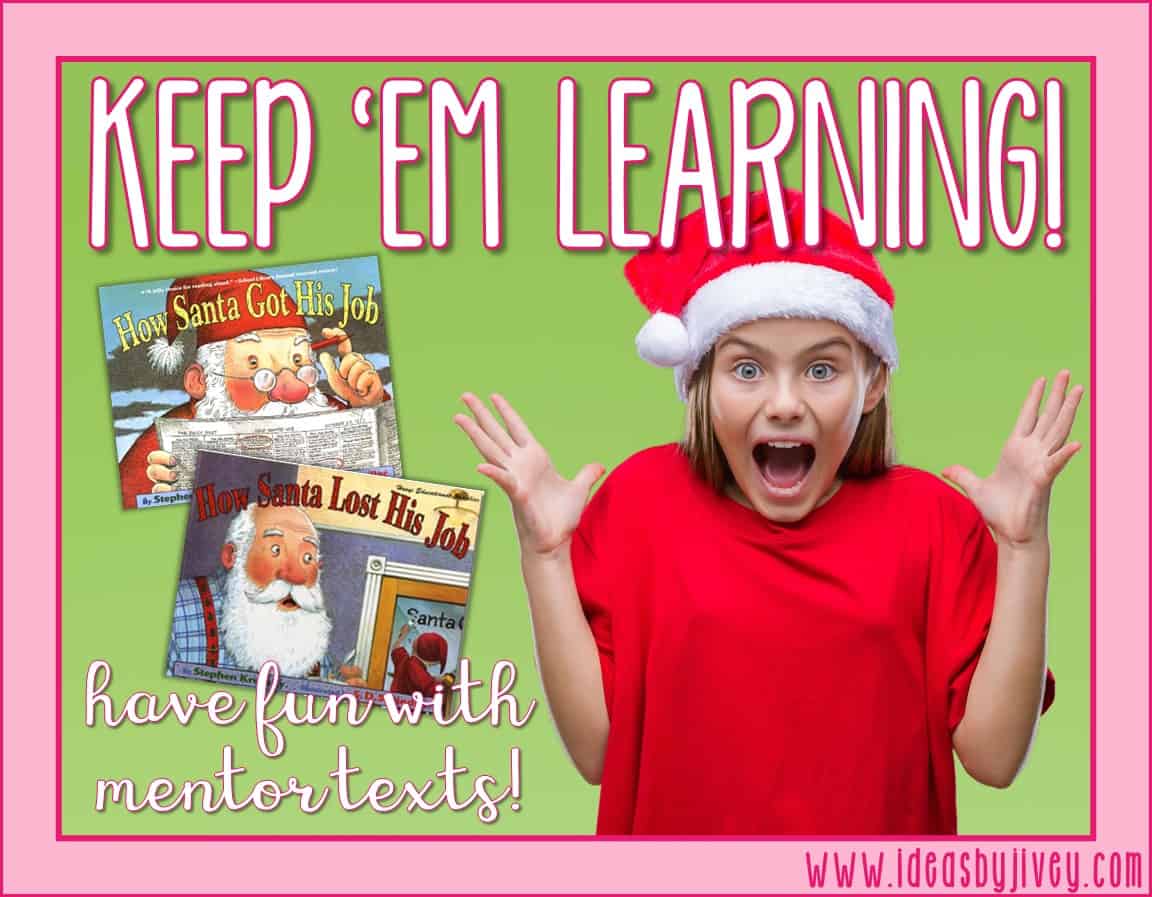 This time of year, it’s no secret that most kids have Santa on the brain…

…so don’t fight that feeling! You definitely can’t beat ’em on this one, so join ’em!

Since it can get tricky to keep students’ learning stamina going this time of year, incorporate fun mentor texts to keep them excited about the season WHILE learning! Of course, they can be used as fun read-alouds, but they can also be implemented for reading, writing, and language standards.

The two mentor texts I’ll be highlighting in this post are by Stephen Krensky:

The book links in this post are affiliate links. It doesn’t cost you anything extra to purchase using my links, and Amazon gives me a few cents per purchase which I use to fund awesome giveaways for teachers!

There is so much that can be done with these two books. Your ELA lessons will be covered for at least a week! 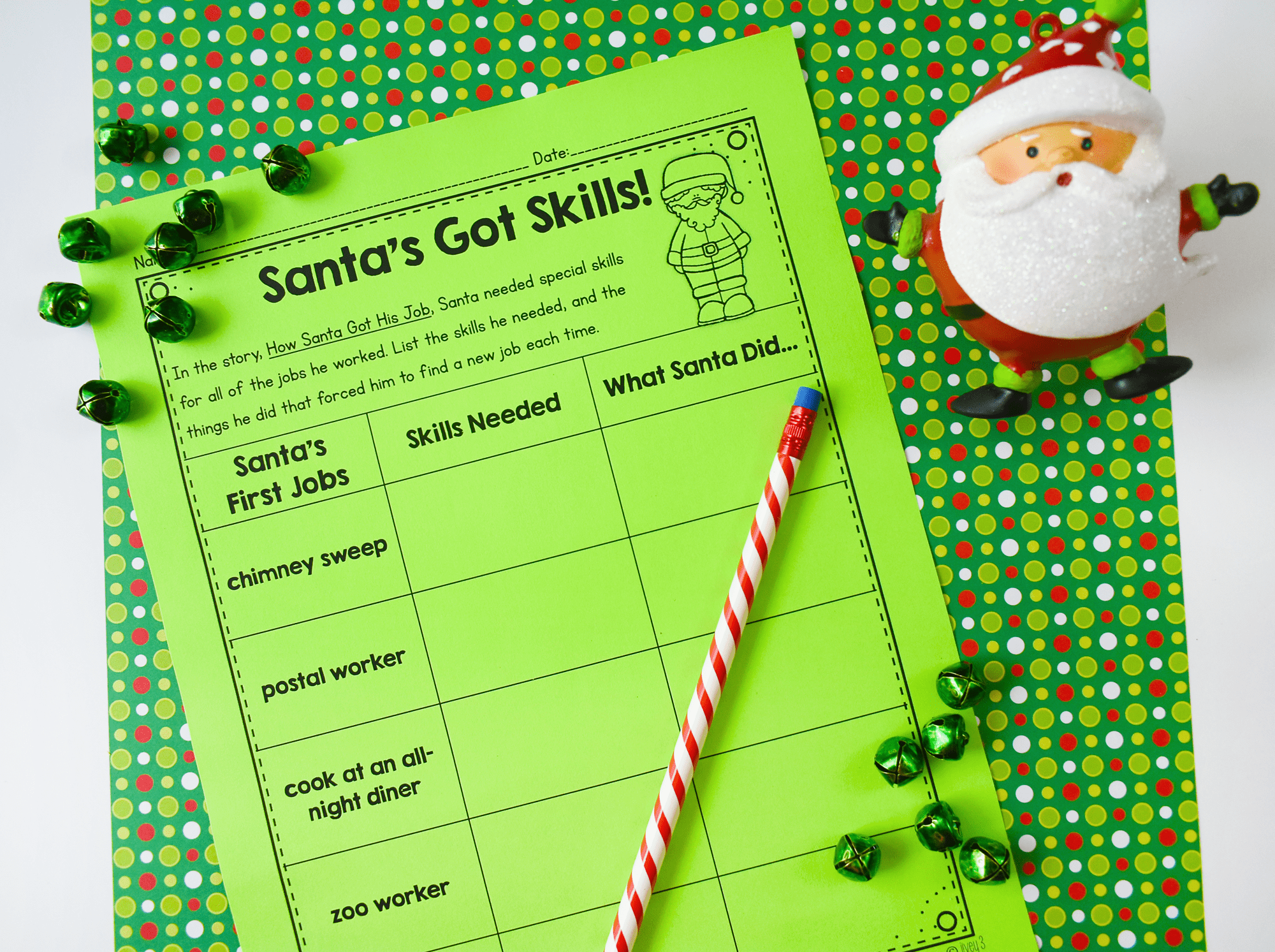 In the first book of the two, How Santa Got His Job, we learn how Santa’s skills led him to his dream job! Students can work on citing specific text evidence to share Santa’s skills, and ultimately why each job didn’t really work out for him.

In the second book, How Santa Lost His Job, a machine is invented to deliver gifts more efficiently, but it causes many problems, too. Students can easily compare Santa to “The Deliverator” to show how a human with love and compassion is always better than a machine.

Both books are excellent for reviewing cause and effect! Not only can you work on identifying causes and effects within the text, but it’s also helpful to work on creating complete sentences containing both the cause and effect. 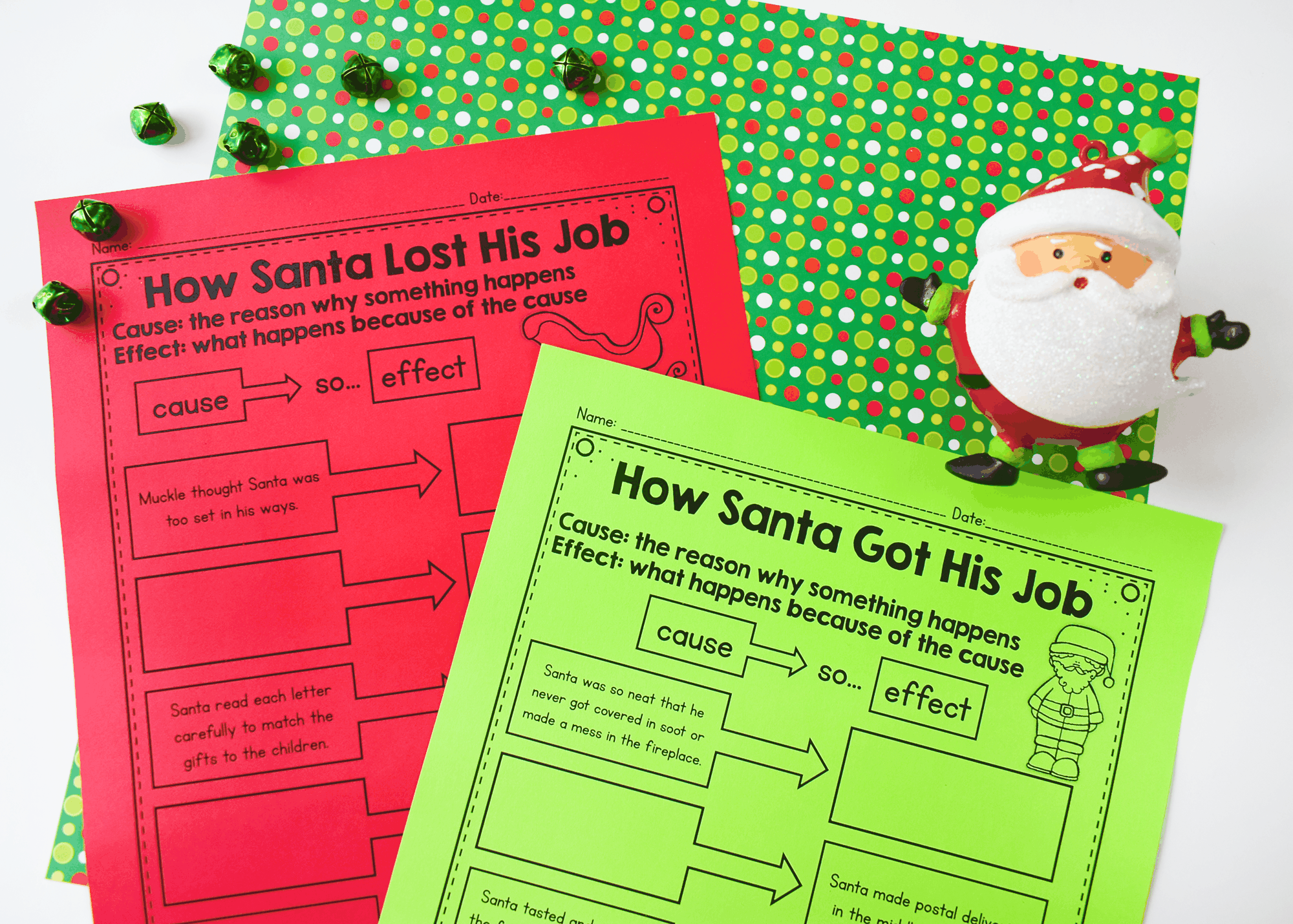 If you share the cause first, use the word “so” to connect it to the effect.

“Santa tasted and sampled the food, so he gained a lot of weight.”

If you share the effect first, use the word “because” to connect it to the cause.

“Santa lost the contest because he took time to carefully read each letter and match kids to gifts.”

You can also “flip” the clauses, putting the dependent clause first!

“Because Santa took time to carefully read each letter and match kids to gifts, he lost the contest.”

Get these cause and effect activities for free!

These mentor texts are great examples to use for student writing! In How Santa Got His Job, Stephen Krensky did a great job explaining the skills of many jobs that Santa had. Students could brainstorm the skills that elves need and write their own story about an elf being hired, the way that the author did about Santa.

Stephen Krensky used a variety of sentence types, as we would want our students to do, so using mentor sentences to demonstrate sentence variety is a great teaching tool! I have a free BONUS mentor sentence lesson for How Santa Got His Job, which focuses on compound sentences. 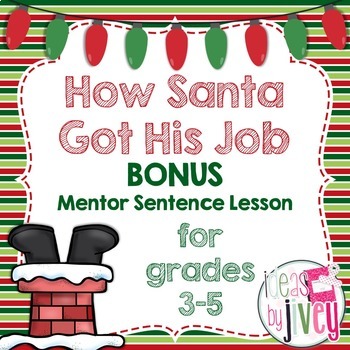 You can also point out the differences from other sentences in the text that use compound subjects and compound predicates, and identify those as simple sentences compared to compound sentences also found in the text. 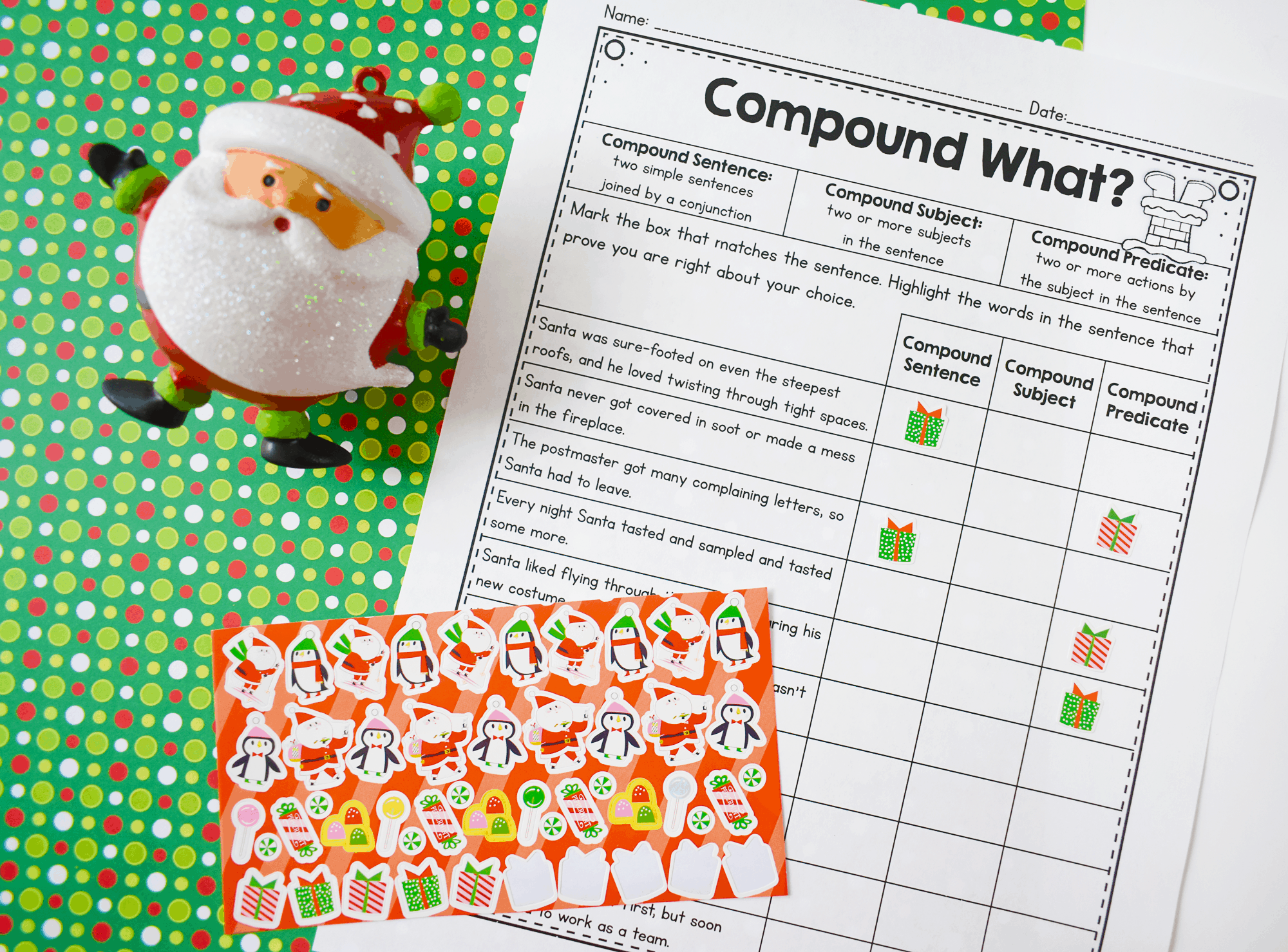 Finally, How Santa Lost His Job is full of dialogue between the elves and Santa. Stephen Krensky is a great mentor for using synonyms for said throughout the text. Some ideas for practice would be to have students use quotation marks, as well as use vivid verbs to replace the word “said” in the tags within dialogue. 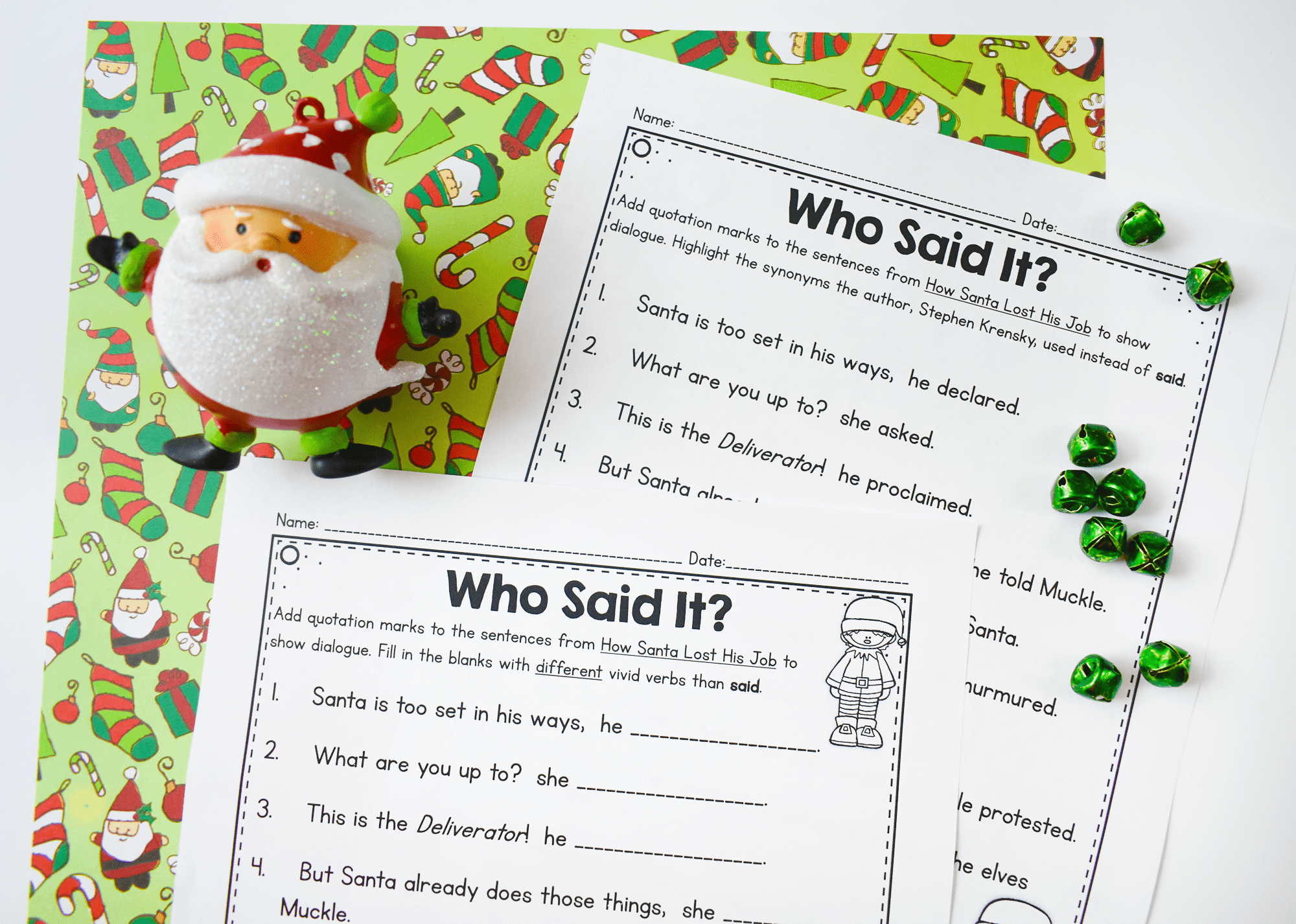 You can find all of these activities (and more) in this seasonal Santa’s Jobs mentor text unit! 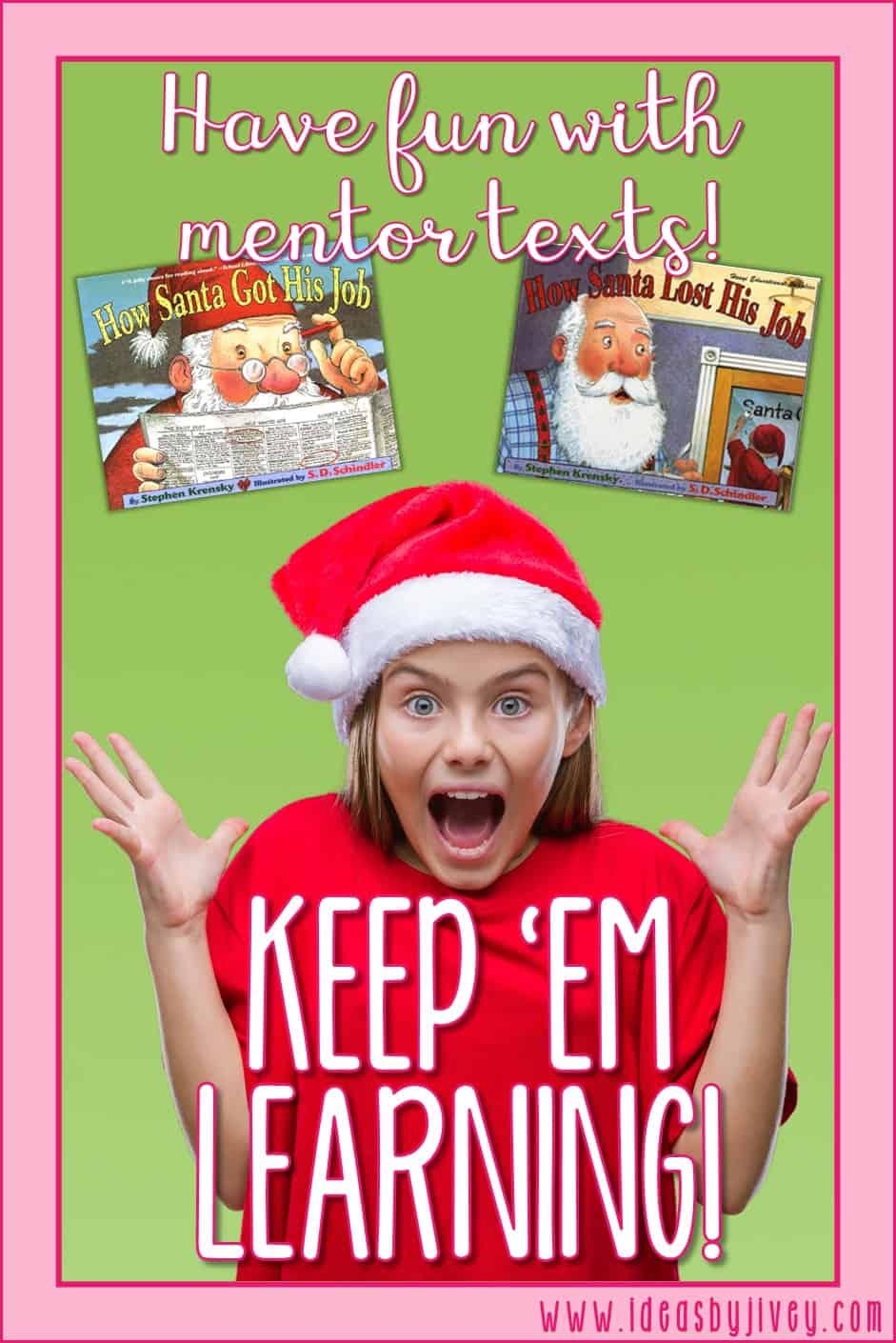 Here are just a few of the #mentortexts perfect for the week of September 11 (and/or before and after, too!) - need ready-made activities for any of these books? DM me with the book title and I’ll share the link with you! #ideasbyjivey #teachersfollowteachers #teachersofinstagram #teachersofig #iteach345 #teacherspayteachers #mentorsentences ... See MoreSee Less

Here are three more of my favorite books to use as mentor texts for September 11. You can get all of the resources (mentor sentences, interactive grammar activities, reading activities, writing prompts, and vocabulary) in a bundle here: www.teacherspayteachers.com/Product/Mentor-Text-Units-for-September-11-Remembrance-in-Grades-3-5-...Are you a member in the All Access Mentor Text Membership? These are all included! members.ideasbyjivey.com/all-accessIf you get this bundle, I suggest beginning the week before September 11 with The Man Who Walked Between The Towers, teaching with Fireboat the week of September 11, and then finishing with 14 Cows for America in the following week. ... See MoreSee Less

If you're looking for an age-appropriate mentor text to read to 3rd, 4th, or 5th graders the week of September 11, I have several I can suggest, but this newest one has easily become a favorite.Do you know about The Survivor Tree of New York City? This Very Tree by Sean Rubin is a must-read, and I created a unit to go along with it to help you approach the sensitive subject of 9/11 as well as teach about resilience, all while covering your required ELA standards.Check it out at here: www.teacherspayteachers.com/Product/This-Very-Tree-Mentor-Text-Unit-for-Grades-3-5-for-911-Septem... ... See MoreSee Less

Come see what’s inside these lessons for kinderg

Mentor sentences are a game changer!!! What do you

When do you introduce text structures? Come check

⏰ Literally HUNDREDS of hours have gone into cre

Over 140 mentor text units at your fingertips for under $8 a month!