Happy Saturday! Are you managing to stay warm where you are?? It is SOOOO COLD here! And it makes me mad because it just should not be this cold if there is no snow on the ground, in my opinion. BRRR!!

Anyway, I’m linking up with my BBB, Joanne at Head Over Heels for Teaching!! We did something super fun this week and I had to share about it, because honestly, I’ve never seen my kids so excited to write poems!

Have you heard of two voice poems? These are poems where two contrasting viewpoints are written- they are created so that two people should read the poem… one person reads as one character, and the second person reads as the other. It should be read line by line, so that some lines are read at the same time by both people… I introduced it by sharing this poem: 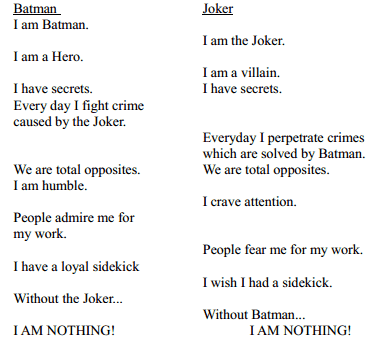 We read Love That Dog before Winter Break (read about that here, here, and here) and we are now reading Hate That Cat. If you have not read these books, go get them NOW! I mean it. They are so wonderful and the kids absolutely love them, too. So anyway, because we had dogs and cats on the brain, we did a class shared writing of a two voice poem about them. They brainstormed about dogs and cats in their notebooks, noting similarities and differences. (I did stress to them that we wanted to focus more on their personalities, not their appearances- for example, we don’t want their similarity to be that they have two ears and four legs…….) Here is the poem that my students wrote as a class! I think you’ll agree, they totally rocked it!! 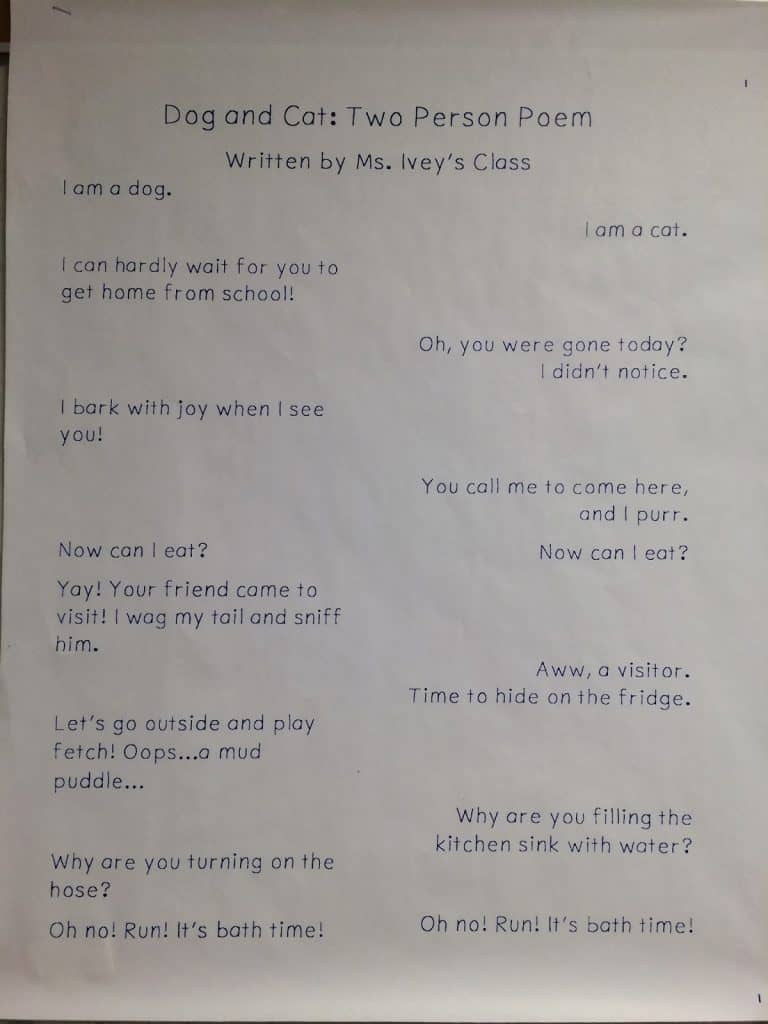 We wrote it first on two pieces of chart paper (one for each voice), then I typed it up and blew it up on the poster maker to hang in the hall. :o)

Then of course, the next day, I wanted them to give it a try. I had them partner up with someone, and since we had been studying the Revolutionary War, I told them to choose two of the people we had been learning about. Boy, did they take the idea and run with it!! Check these out! 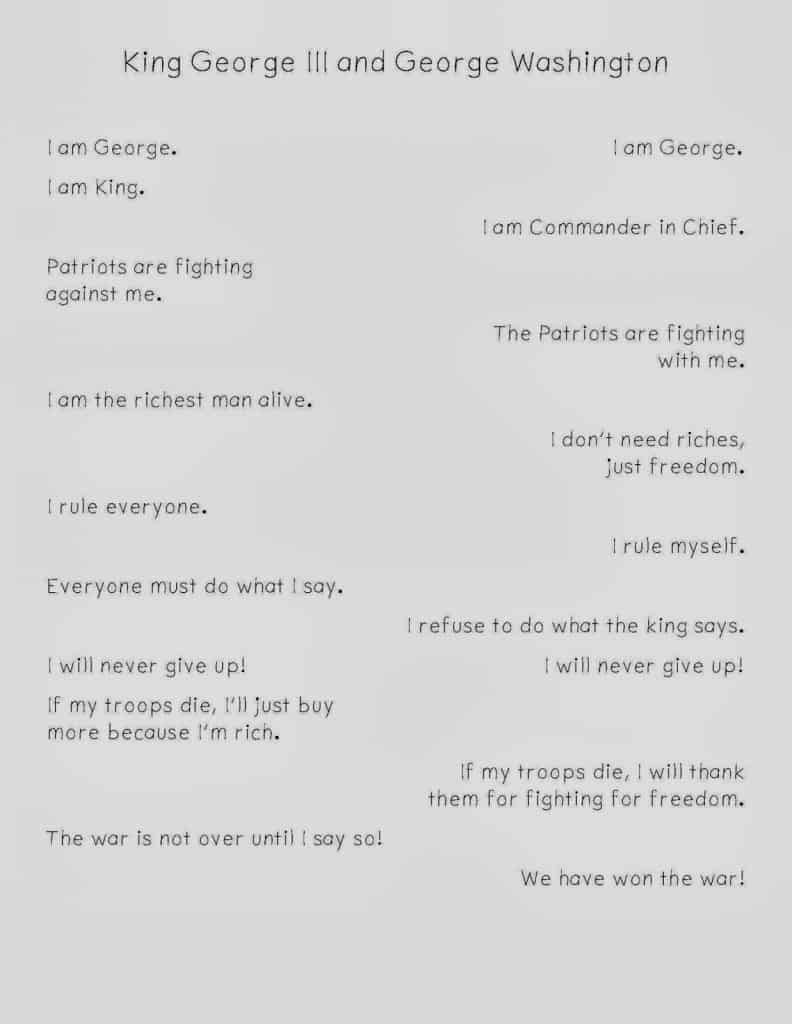 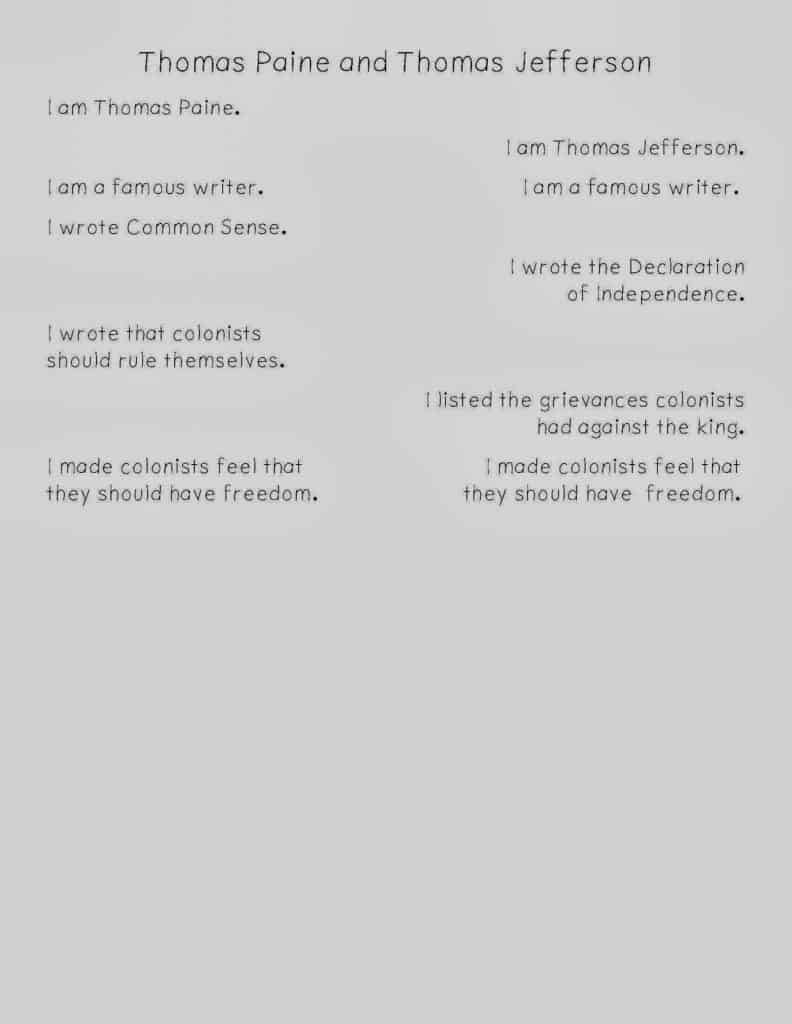 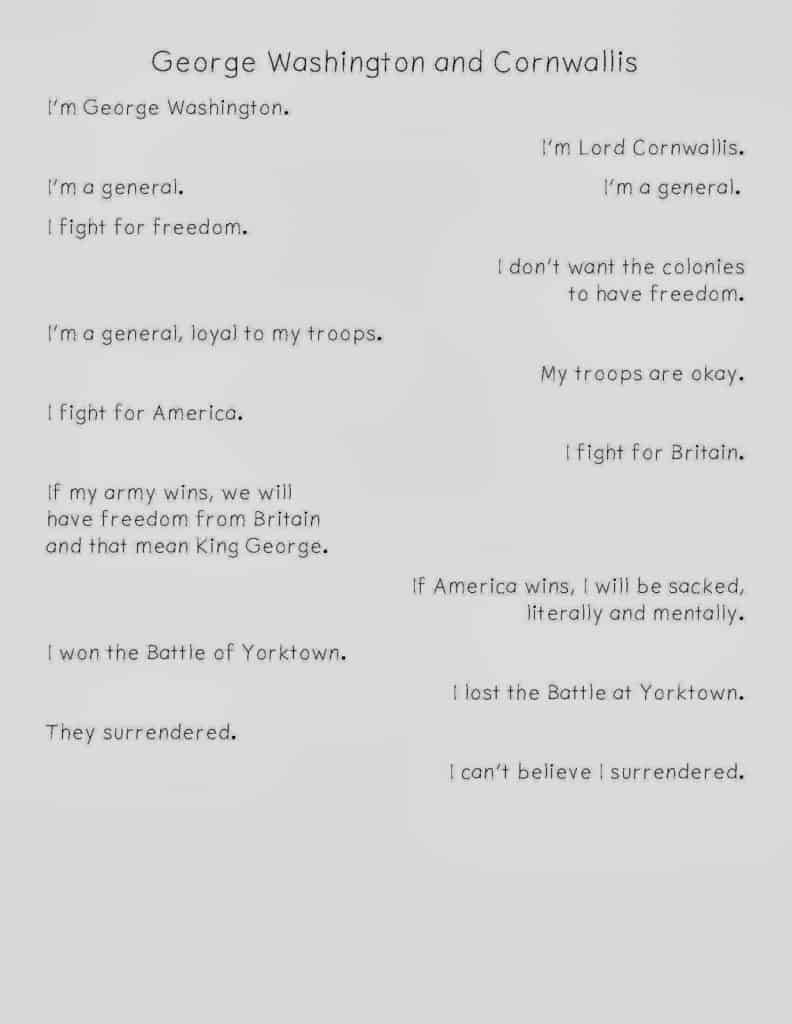 They didn’t get finished with them on Wednesday, and begged me to let them work on them on Thursday…! Of course, I had to say yes. Then when I told them that, if they wanted me to, I’d type them and make them into posters for the hall like our first one, I thought I might get a few volunteers… but I had 75% of them wanting me to type them! I was so excited! Now to find room in the hall……. HA!

I think having them work together, giving them choice on who they wrote about, and then of course, it being a free-verse poem (no rhyming words!!) really motivated them. Even if you don’t teach poetry, I encourage you to try out this activity- it’s great for compare and contrast, which is one of our big standards to teach! :o) And of course, integrating it like I did can help cover some of your Social Studies, too!

My club units have been some of my favorite resources to create because the planning and creation were guided by the teachers using them!Because of the input from your fellow teacher community, I know these units will be such a benefit to you, too! Every unit in the bundle has: 📕a week of plans that integrate multiple skills and subjects📙detailed explicit lessons, including teacher samples📒a week-at-a-glance plan📗digitally converted activities in Google Slides and Forms, when applicable📘mentor sentence lesson📕reading and writing lessons📙integration of other subjects (science, social studies, or social/emotional skills)📒printables for skill practice📗at least one other text (poem, article, paired passages)* to integrate with your lessons *this will vary each unit depending on skills covered!📘short assessmentsCheck out the latest bundle - www.teacherspayteachers.com/Product/MENTOR-TEXT-CLUB-by-Jivey-2ND-EDITION-for-Grades-3-5-7058941 ... See MoreSee Less

Did you know I have a total breakdown of how mentor sentences can look day by day in your classroom?Head over to my blog! www.ideasbyjivey.com ... See MoreSee Less

This feedback means so much to me because as I’ve made my mentor sentence lessons over the last ten years, I’ve put so much thought into the way I craft my units and bundles! Thank you for trusting me! ❤️ #mentorsentences ... See MoreSee Less